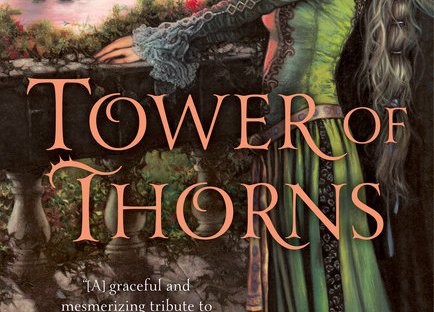 Tower of Thorns is the second volume in the Blackthorn & Grim series by Juliet Marillier. Continuing directly from Dreamer’s Pool, Blackthorn and Grim face new challenges and old memories as Blackthorn struggles to endure the rules imposed upon her by the Fey lord Conmael. While visiting the Dalriadan court with Prince Oran, Blackthorn and Grim agree to assist Lady Geileis, a young noblewoman travelled to court with a tale of her holding beset by an eldritch monster, its constant wailing cursing her lands with an unbearable sorrow. Blackthorn agrees to travel to Bann, now accompanied by Flannen, scholar and friend from her past, long thought dead. Flannen offers Blackthorn the chance to return with him to Laois, confront Mathuin as they had always devised.Once in the near-deserted holding of Bann, Blackthorn deliberately deceives Grim, planning to leave with Flannen but not Grim. Blackthorn focuses on how evict the Fey monster from its oddly chosen residence of a river tower, more prison than home. Lady Geileis discovers a family tale, whereby the monster remains imprisoned until it can be freed on Midsummer Eve, where the perilous waters around the isolated tower calm and the thorn hedges encircling it open. While Blackthorn prepares the rites to release the creature from its bonds, Grim is best by sorrow brought forth from the wailing imprisoned monster. Even as Grim struggles to repair a nearby monastery, his darkest memories resurface as the incessant eldritch cries pull him into the past and he flees into the forest. Dazed and lost, Grim is befriended by elusive small forest fey who grant him aid in return for his kindness.
Tower of Thorns explores the light and darkness of all the characters where the bitter-sweet tale of eldritch enchantment is juxtaposed with the Blackthorn and Grim experiencing a resurfacing of past desires and sorrow. The events inevitably pull Blackthorn and Grim closer as their past and future roads begin to merge.