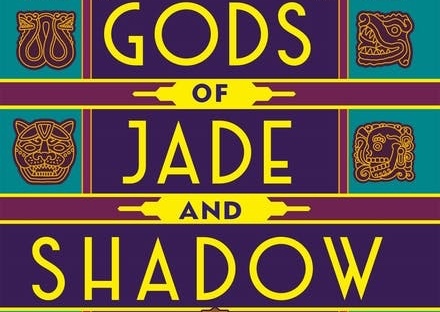 “The Jazz Age is in full swing, but Casiopea Tun is too busy cleaning the floors of her wealthy grandfather’s house to listen to any fast tunes. Nevertheless, she dreams of a life far from her dusty, small town in southern Mexico. A life she can call her own. Yet this new life seems as distant as the stars, until the day she finds a curious wooden box in her grandfather’s room. She opens it–and accidentally frees the spirit of the Mayan God of Death, who requests her help in recovering his throne from his treacherous brother. Failure will mean Casiopea’s demise, but success could make her dreams come true. In the company of the strangely alluring god and armed with her wits, Casiopea begins an adventure that will take her on a cross-country odyssey, from the jungles of Yucatán to the bright lights of Mexico City–and deep into the darkness of the Mayan underworld.”

I recently read Gods of Jade and Shadow by Mexican-born Canadian author Silvia Moreno-Garcia, a historical fantasy inspired by the folklore of the Popol Vuh, a Mayan creation myth and retold in 1920s Jazz-era Mexico featuring Xibalba, the Mayan Underworld and formidable the twins-lords, Hun-Kame and Vacub-Kame.
The unlikely heroine of Gods of Jade and Shadow is Casiopea Tun, the a poor cousin and treated like a servant in her grandfather’s house after her father’s death forced her destitute mother to return home to rural Uu­kumil. But Casiopea is proud and independent but as she grows to adulthood her dreams have become crippled by the confines of the small, rural world of Uukumil and she only dreams now of escaping it. In a sudden act of defiance, Casiopea opens a chest in her grandfather’s room, unknowingly releasing the death-god imprisioned within. The god is Hun-Kame, Lord of Xibalba who has been imprisoned in the chest since Casiopea’s grandfather aided his twin Vacub-Kame, to take control of the Underworld.
Once again free, Hun-Kame must reunite the missing pieces of himself taken from his body to regain his full-power. There is a cost to regaining his power. Hun-Kame maintains his mortal form only through Casiopea who has a shard of his bone embedded in her hand. If she removes the bone shard, Hun-Kame will fade and his brother take dominance of the Underworld forever. But Casiopea has little interest in letting Hun-Kame lose, he offers her escape from the dull existence in Uukumil, the chance to see more of the world, even as she knows the bone shard within her drains her life while strengthening Hun-Kame’s. Together Casiopea and Hun-Kame must race against time to restore the missing parts of Hun-Kame’s body and reunite his power before too much of Casiopea’s strength is drained and before Hun-Kame risks becoming mortal. It is a delicate game to maintain the balance between life and death and soon, Casiopea and Hun-Kame begin to hope for more than the original bargain they set themselves.
In Xibalba, Vacub-Kame had bitterly spent the ages in the footsteps of his twin where Hun-Kame was the rightful ruler of the Underworld. In the final treachery that allowed Vacub-Kame to imprison his twin brother and take Xibalba for himself, a greater plan has grown to destroy Hun-Kame forever and restore the dominion of Xibalba over earth, returning the ancient Mayan practices of blood sacrifices and terror in his worship. In Baja California, Hun-Kame and Vacub-Kame must finally battle for rule of Xibalba, choosing champions to act in their stead. Hun-Kame chooses Casiopea while Vacub-Kame chooses her cousin, Martin, who was as belittled by their grandfather in Uukumil as Casiopea but found solace in belittling his poor cousin. There is no love loss between Casiopea and Martin.

My Thoughts?
Gods of Jade and Shadow is much more than a retelling of a mythic contest between two death gods, the lords of Xibalba. The novel is gloriously detailed in the setting, from the vibrant Jazz-era Mexico to the nightmarescape of the Underworld, Xibalba. The characters are rich and intriguing, the central message throughout Gods of Jade and Shadow is of the importance in maintaining balance. This central theme is reflected in the plot, and in the external and internal struggles of characters. The dream-like quality to the narration adds to making this novel feel like a classic myth, a dark fairytale and a joy to read.